THE MAIN SOURCES OF GMOS 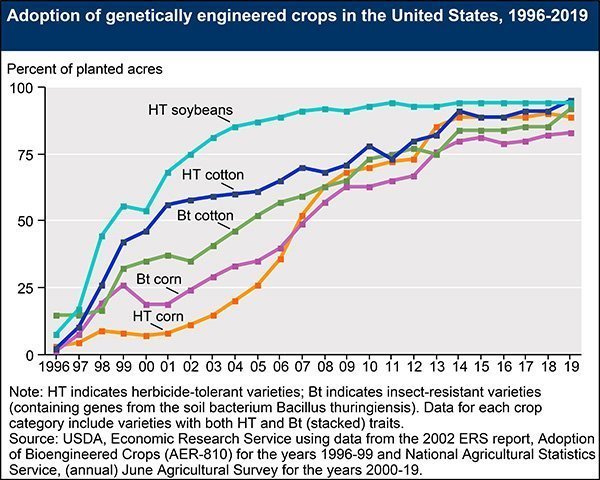 U.S. sugar beet production is estimated to be over 95% genetically modified for herbicide resistance. [3]

GMO sweet corn, papaya, zucchini, and yellow summer squash are also for sale in grocery stores, but in far lesser amounts. Genetically modified alfalfa is grown for use as hay and forage for animals.

Currently, the GMO potato is being marketed under the Simplot Innate brand, found under the trademark White Russet. It was introduced to grocery stores in 2015. In late 2018, the scientist who developed the GMO potato renounced his work calling the potatoes a health risk.

Genetically engineered non-browning ‘Arctic’ apples have been deregulated by the USDA and have been on the market since 2016.

Seedless watermelons, tomatoes and pluots are NOT genetically modified.

Other Sources of GMOs:

SOME OF THE INGREDIENTS THAT MAY BE GENETICALLY MODIFIED:

Processed foods often have hidden GM sources (unless they are organic or declared non-GMO). Click here for a complete list of Invisible Ingredients.

SOME OF THE FOODS THAT MAY CONTAIN GM INGREDIENTS:

THE BEST WAY TO AVOID GMOS

USDA organic standards do not allow the intentional use of GMOs, Roundup or other synthetic toxic chemicals. We have advocated for many years that manufacturers label products as non-GMO. But this is not enough if you are looking to avoid Roundup as well.

To find out more, check out our GMO v. Organic page.