A potentially cancer-causing chemical is sprayed on much of America’s produce. How high is exposure near you? 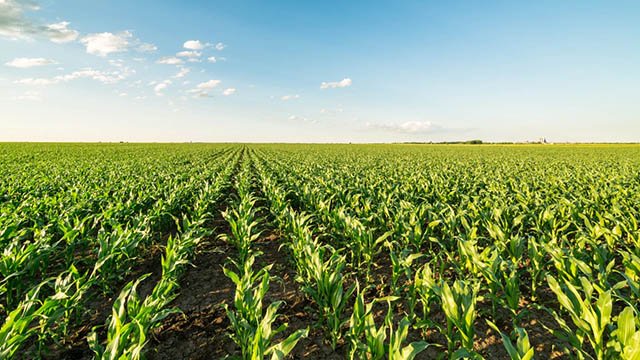 This article originally published on NBCNews.com by Danica Jefferies

Weedkillers containing glyphosate are sprayed on nearly half of all corn and soybeans grown in the U.S. Exposure is highest in parts of Iowa, Illinois and Indiana.

On a daily basis, many people in the U.S. could be exposed to a potentially cancer-causing chemical used in the world’s most common weedkillers. Data shows that people in the Midwest, parts of the South and Colorado have the highest exposure.

Glyphosate, the active ingredient in many herbicides, has been in use for nearly 50 years. But the chemical’s health impacts have been heavily debated, with lawsuits arising over allegations that the chemical is linked to cancer. The Environmental Protection Agency has maintained that there is no risk to human health based on current uses and that there is no evidence glyphosate causes cancer. Bayer, the pharmaceutical company that sells the most widely used glyphosate herbicide, says it stands by the safety of the chemical.

Glyphosate’s main use is in agriculture; weedkillers containing it are sprayed on nearly half of all planted acres of corn, cotton and soybeans in the U.S. They’re also used on wheat, oats, beans and fruits. And data from the U.S. Geological Survey shows several counties across the country with higher than average glyphosate usage.

Glyphosate usage in the U.S.
Herbicides containing glyphosate are most used in farmland counties, with areas in Colorado and Texas topping the list. 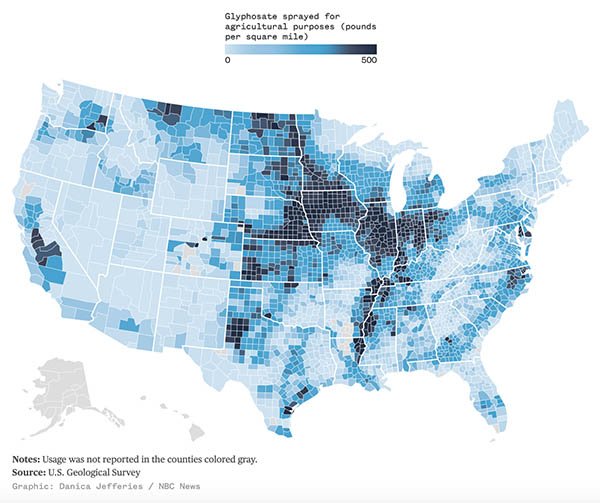 The chemical giant Monsanto introduced glyphosate in its product Roundup in 1974. Bayer acquired Monsanto in 2018.

“Glyphosate is the most widely used chemical weedkiller in human history because of genetic engineering,” said Dave Murphy, the founder of Food Democracy Now, an advocacy group that tests glyphosate in food. “It’s sprayed ubiquitously and Monsanto has, for decades, just maintained that it’s the safest agricultural chemical ever made.”

The EPA’s safety limits for glyphosate exposure from food are twice the levels allowed in the European Union. Its runoff is recognized by the agency as a drinking water contaminant at levels that correspond to approximately 1 gallon of Roundup in an Olympic sized pool, according to an NBC News calculation.

Much of the debate about glyphosate’s health implications revolves around a potential link to non-Hodgkin lymphoma. A 2019 analysis conducted by former EPA science review board members indicated a “compelling link” to the disease. Several peer-reviewed studies have also suggested that herbicides containing glyphosate may disrupt hormones and alter the gut microbiome.

In 2015, the World Health Organization’s International Agency for Research on Cancer said glyphosate was probably carcinogenic to humans, kicking off a wave of lawsuits that cost Bayer more than $10 billion.

In California, glyphosate is on a list of chemicals known to cause cancer, a designation that requires manufacturers to print warning labels on products sold in the state. However, Monsanto and the EPA challenged the requirement, preventing such warnings on glyphosate products.

Litigation is ongoing. In a statement to NBC News, Bayer said it continues to oppose California’s determination because it conflicts with “the longstanding consensus of leading health regulators worldwide supporting the safety and non-carcinogenicity of glyphosate-based products.”

Glyphosate’s use in the U.S. has skyrocketed since 1996, the year Monsanto introduced genetically engineered seeds that could survive being sprayed with higher quantities of herbicides.

The rise of herbicide
Use of glyphosate in agricultural crop treatments rose tenfold after Monsanto introduced genetically engineered crops in 1996. 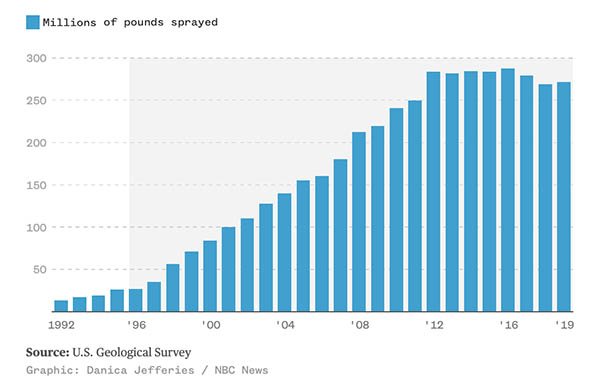 Today, almost 90% of corn, cotton and soybean crops are modified to be tolerant to glyphosate and other chemical treatments used by farmers, U.S. Department of Agriculture data shows.

New technology
The percentage of seeds planted each year that are genetically modified to be resistant to herbicide.

A 2017 study from researchers at the University of California, San Diego showed that the amount of glyphosate in urine samples taken from a group of 100 adults rose between 1993 and 2016. Glyphosate residues have also been detected in air and rain samples, according to a study from the University of Minnesota. Additionally, two reports by organic advocacy groups found glyphosate in food products including cereals, cookies, crackers and sandwich bread.

A national health survey released in June by the Centers for Disease Control and Prevention observed detectable levels of glyphosate in 80% of urine samples tested.

Bayer said that finding traces of glyphosate in urine does not mean there’s a health risk. The company told NBC News in a statement that the highest value found in the CDC’s survey “corresponds to exposures that are less than 0.14% of the U.S. Environmental Protection Agency’s safety threshold” — a measurement that works out to 16 millionths of an ounce per pound of bodyweight.

“The CDC’s data confirms that human exposures to glyphosate are well below these levels, confirming glyphosate can be used safely when following label instructions,” the statement said.

But Robin Mesnage, a toxicologist at King’s College London who has researched the health effects of environmental contaminants for more than a decade, has questioned whether the current safety thresholds are too high.

His own research, he said, has found glyphosate can induce DNA damage and changes in liver metabolism at doses up to 100 times lower than the permitted levels. He added that combining glyphosate with the other ingredients in herbicides can lead the final product to be more toxic than its active ingredient alone.

The EPA concluded in 2020 that glyphosate posed “no risks to human health” and was not likely to cause cancer. But a federal appeals court rejected that determination in June, stating that the EPA did not adequately assess the risks to endangered species and human health. The court also pointed out inconsistencies in the agency’s 2016 evaluation of potential links to non-Hodgkin lymphoma. The EPA withdrew its decision in September.

An internal EPA advisory panel also found inconsistencies in that 2016 evaluation, including that some tumor responses in animals had been discounted. The panel recommended that the EPA obtain updated data in order to make a conclusion about non-Hodgkin lymphoma risk.

“Animals did get tumors and they got more tumors at high doses,” said Bill Freese, the science director at the Center for Food Safety, a nonprofit environmental advocacy organization that was one of the groups that challenged the EPA’s glyphosate review in court.

“Their cancer conclusion just did not make sense,” Freese said.

EPA spokesperson Melissa Sullivan said in an email that the agency plans to revisit and better explain its evaluation of glyphosate’s carcinogenic potential by 2026, as well as to consider whether to assess other impacts it may have on human health. Until that review is completed, products containing glyphosate can continue being sold.

When it comes to residue in food, the EPA has said traces are fine as long as they don’t exceed its safety thresholds. But environmental and organic advocates note that these thresholds have increased in the past two decades. In 2013, following a Monsanto petition, the EPA drastically raised the permitted levels of glyphosate residues on certain foods, doubling the allowable limit for oilseeds and raising it to more than 15 times the previous level for sweet potatoes and carrots.

Bayer plans to replace glyphosate in some versions of Roundup by next year. The company said in its statement that the move was made “exclusively to manage litigation risk in the U.S. and not because of any safety concerns.” The current formula will still be available to farmers, pest control companies and other professional services.