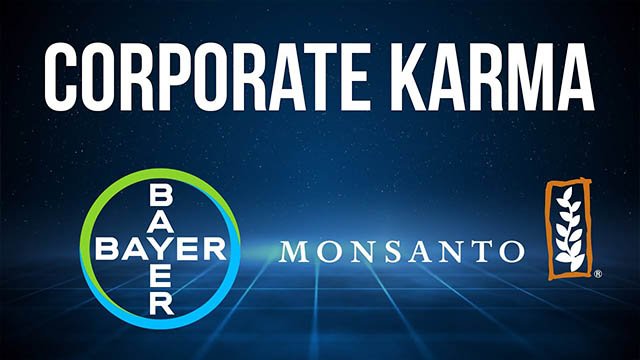 Bonn, Germany, 29 April— For Bayer’s Annual General Meeting yesterday, Monsanto investigator Jeffrey Smith predicted that Bayer will face possible bankruptcy from a new wave of lawsuits linking Roundup herbicide to numerous diseases, and that the current expected payout of up to $12 billion to more than 50,000 plaintiffs with Non-Hodgkin’s lymphoma (NHL) is only the beginning. In questions submitted at Bayer’s AGM and elaborated in a short video and online presentations, Smith, the founder of the Institute for Responsible Technology, said Roundup is now implicated in several other cancers and more than 2 dozen diseases. “The total number of people suffering from these conditions is staggering,” wrote Smith, “thousands of times more than those currently represented. If even a tiny percentage were to receive a settlement, the award could easily bankrupt Bayer.”

In 2019, Bayer shareholders gave their leadership an unprecedented Vote of No Confidence due to its ill-fated purchase of Monsanto, the maker of Roundup. Massive jury awards in just three trials by four plaintiffs had previously caused Bayer’s stock price to plummet by more than 35% and forced its chairman to step down yesterday. Smith, who has been exposing Monsanto’s dark side in books, movies, and presentations in 45 countries for 24 years, had written an open letter to Bayer investors in 2016, urging them to not to purchase Monsanto. He accurately listed Roundup’s classification as a “Probable Human Carcinogen” as one of the significant liabilities that could hurt Bayer.

At this week’s online side event organized by Coordination against BAYER-Dangers (CBG), Smith explained research that demonstrates how Roundup damages several physiological systems and can therefore cause or exacerbate numerous chronic conditions. In his AGM submittal, he described the threat and outlined a way forward that could protect the company and the public. If the AGM were held in-person, Smith would have been given time to read his statement and could have alerted shareholders to the new dangers. But for this year’s online conference, Bayer received and edited written submissions. They chose not to share Smith’s prediction or proposed way forward. Bayer did restate their claim that Roundup is not harmful.

Bayer Can Take Steps to Protect from Bankruptcy

Based on his analysis of the Roundup trials, which included hours of interviews with attorneys and jurors, Smith says “Two categories of evidence drove the juries’ judgements and large punitive awards, Monsanto’s malicious behavior and the weight of the science. Unless Bayer addresses both, they will continue to lose.”

In his AGM submittal, Smith wrote: “Monsanto’s history was fraught with coverups, bullying, lies, and manipulation. . . Juries were furious with Monsanto’s behavior, and with Bayer for keeping the evidence hidden.”

To remedy this, he asked Bayer directors, “Are you willing to make public all evidence on Roundup and Monsanto’s bad behavior, including every internal study and related document on safety, and every instance where Monsanto manipulated, colluded, attacked, and covered up? By exposing and condemning Monsanto’s prior behaviors, you will distance yourself and claim the higher ground.”

Smith wrote, “The science presented on behalf of Monsanto was thin and superficial at best, and more often fraudulent. Juries were angry at Monsanto for not doing the meaningful tests that could demonstrate safety and protect consumers. At the same time, jurors were given ample data from independent studies verifying the link to non-Hodgkin’s lymphoma.”

Although Smith believes there is now ample evidence to remove Roundup from the market, he says that if the company refuses to do so, Bayer should “fully fund independent comprehensive intergenerational studies on the full Roundup formulation, looking for links to disease?” He said in his submission, “If the studies shows safety, then you have the data to fend off lawsuits. If the studies show otherwise, you must immediately remove Roundup.”

Bayer did not share these statements and questions with investors.

Smith says, “We hoped that Bayer would finally become the responsible corporate citizen it claims to be, but instead it has chosen to continue in the tradition of Monsanto. Bayer ignores science, hides evidence from its shareholders and the public, and continues to expose the population to its very dangerous herbicide Roundup.”

Bonn, Germany, 23 April — In their message to the 2020 Bayer shareholders meeting on April 28, leaders of The Institute for Responsible Technology (IRT) and Coordination against BAYER-Dangers (CBG) warn that unless the company takes measures to come clean from the dark past of Monsanto—a company they purchased two years ago—emerging liabilities could ultimately force them into bankruptcy. Large jury awards for plaintiffs who used Monsanto’s Roundup herbicide and suffered from Non-Hodgkin’s lymphoma (NHL) caused Bayer’s stock value to plummet by more than 35% and could ultimately cost them up to $12 billion. But Jeffrey Smith, IRT’s founder, asserts “this is just the first chapter.”

Smith, who has been exposing Monsanto’s dark side for a quarter of a century, warned Bayer four years ago against making the purchase. In an open letter, he listed the WHO’s classification of Roundup’s active ingredient as a “probable carcinogen” among several “unprecedented liabilities” that threatened to collapse Monsanto’s core business. In a 2-minute video prepared for Bayer’s 2020 Annual General Meeting, Smith states that Roundup is now linked to more than 30 diseases. “The number of potential plaintiffs with other Roundup-related diseases is so great,” Smith says, “if just a fraction received a payout proportional to the anticipated NHL settlement, it could bankrupt the company.”

Bayer Must be a REAL Corporate Citizen

Although Bayer says it’s committed “to its social and ethical responsibilities as a corporate citizen,” Marius Stelzmann, managing director of CBG, challenges the claim. “It’s time to stop the false advertising, to acknowledge the carcinogenicity of glyphosate, and most of all, to compensate the victims.”

Due to more potential lawsuits, however, Smith says that they must go further. “Bayer must demonstrate to juries that it has gone overboard to be the good corporate citizen that Monsanto refused to be.”

Question 1: How does corporate power and the destructive nature of agriculture, which glyphosate and Bayer stand for, relate to each other?

Question 2: What experiences have you had in direct confrontation with corporations (BAYER, MONSANTO, etc.)? Have your actions already been attacked by them?

Tuesday, April 28th 9am in Germany

The Monsanto Papers are documents obtained during the Roundup litigation in discovery. You will find links to internal Monsanto emails, text messages, company reports, studies and other memoranda.

The documents in this chart are categorized as follows:

The Monsanto Papers tell an alarming story of ghostwriting, scientific manipulation, collusion with the EPA and other agencies, and previously undisclosed information about how humans absorb glyphosate. These documents, which Monsanto does not want you to see, provide a deeper understanding of the serious public health consequences surrounding Monsanto’s marketing of Roundup.

As the three NHL trials progressed, more and more this evidence came to light and was presented. In the third trial, where the most evidence was presented, the punitive damage award was the highest, set by the jury at $2 billion (later reduced by the judge to $86.7 million). Here are two examples that were only presented in third trial.

Researchers can test how much herbicide is absorbed into skin by testing their formulations on the skin of human cadavers. According to documents and testimony, the amount of Roundup that penetrated the cadaver skin was more than three times the allowable limit. Instead of reporting the actual levels to the Environmental Protection Agency (EPA), they manipulated the research to achieve an acceptable outcome. The scientists baked cadaver skin in the oven, then froze it! The skin became tough and leather-like. The scientists re-applied Roundup and as expected, very little was absorbed. They reported this manipulated absorption rate to the EPA, without disclosing that they cooked and froze the skin first.

In 2010, a popular health website published an excerpt of Jeffrey Smith’s book, Genetic Roulette: The Documented Health Risks of Genetically Engineered Foods. The article explained how genetically modified foods were more dangerous for children. The article referenced and quoted the Royal Society of Canada, the US Environmental Protection Agency, the UK Royal Society, the FAO/WHO task force on GM food, and several experts.

In his closing arguments, the plaintiff’s attorney Brent Wisner asserted that a responsible company would take “seriously” a science-based argument that children were at risk from their product and would “figure out a way to see if there’s an actual problem.”

Instead, the Monsanto Papers revealed that the head of a Monsanto-funded front group reported to company executives that he was planning to go after Smith and the article. His email further stated, “this is like playing whack-a-mole at the carnival.” (Whack-a-mole is an arcade game where the player uses a mallet to strike on the head toy moles that appear at random.)

In his response to the email, Monsanto’s head of Medical Sciences and Outreach, Daniel Goldstein, responded: “Funny you should say [whack-a-mole]. Donna Farmer (glyphosate toxicology) and I have been playing whack-a-mole for years and calling it just that. We were joking about it yesterday.”

Numerous other documents verify that Monsanto has a large budget and standard procedures of attacking any adverse finding or criticism.

Here are various compilations of studies.
List of references on the health effects of glyphosate
https://www.responsibletechnology.org/gmo-dangers/list-of-references-on-the-health-effects-of-glyphosate/

Documents assembled by the law firm Baum, Hedlund, Aristei & Goldma, who represent numerous plaintiffs. This provides a more in-depth analysis of the link to cancer in general, and non-Hodgkin’s lympoma in particular.
https://www.baumhedlundlaw.com/toxic-tort-law/monsanto-roundup-lawsuit/roundup-cancer-study/