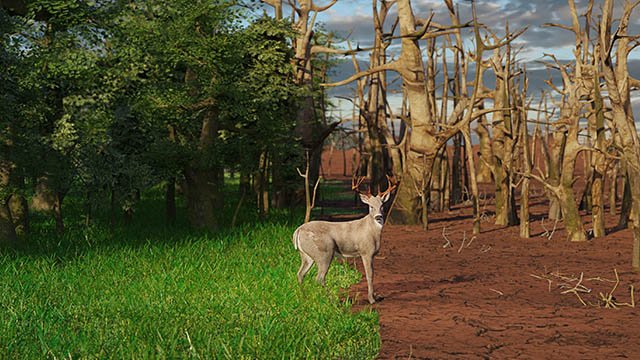 I spoke to a scientist last week, (not a GMO scientist), and I was talking about the potential for  GMOs to overrun and replace nature with a corrupted gene pool on a permanent basis.

He raised an issue or an objection to this, which is an old biotech industry talking point. He asked, “Yes, but isn’t it true that GMOs can’t survive in the wild? That once you release them, they’ll just die off?”

This was the excuse made by the biotech industry in the face of concerns that this technology could permanently create a new gene pool and they had no technology to clean it up. There was no evidence, however, to show that this die-off was likely. It was just their theoretical argument made with great confidence. This confidence still continues and is reflected in the words of people like this scientist.

I explained to him: “No, actually there was just a study published this month that showed the opposite.” In many cases GMOs not only will survive, but they’ll actually have a higher invasive potential, ability to disrupt associated ecosystems and increase their “fitness”  – the ability to survive and proliferate even better than the original.

This was a study that was conducted and was published this month, March 2020 in Environmental Sciences Europe. It was a review study about what happens with GMOs going wild. “The GE Plants Going Wild,” is, in fact, the name of their release. Spreading the risks when genetically engineered organisms go wild.

I spoke to one of the scientists, one of the lead authors, Christoph Then. I am impressed with his work. This is an interesting concept and the first publication focusing on next-generation effects.

The idea is: You plant a bunch of GMOs (they have gone through risk assessment) and then they may survive in the next generation or they may cross with wild relatives. What happens next? Now we know that GMOs can escape their boundaries. They can spread as GMO canola has spread through the Midwest and the North.

When canola was shipped to Japan, I  was there in the ports pulling out canola plants that were growing between the cracks in the sidewalks because they ship the seeds to Japan. They’re not allowed to legally plant canola seeds, but they fall off the transport vehicles. There are  big overhead apparatuses that will move tremendous amounts of the seeds, to then be transported and then crushed into oil. But some spill out and end up growing in Japan illegally.

They cross with the natural varieties because canola happens to be relatives with all these brassicas and other weeds. You have the herbicide-tolerant weeds growing throughout Japan, growing in Europe and in the United States.

It’s very interesting that the hazards from GMOs might emerge in the following generations. So the risk assessment takes place before the first growing season. But the second generation might have completely different characteristics resulting in displacement and even extinction of the native plant species.

Neither the US nor the European Union takes into account these changes that occur after release.

The study team looked at fitness: What would be the increase or decrease in fitness (among other things) of the next generation of GMOs? They focused just on plants.

But we already know from examples of genetically engineered fish, that they can have higher reproductive success. Sometime the males willl grow bigger and the females will be attracted more to the faster-growing males. But in one case they found that the genetically engineered medaka (a small Japanese fish) had a slightly higher likelihood that it would mate but only a 70% survival rate of the offspring. That’s 30% less than the natural variety. They entered the characteristics of these medaka into a computer program at Purdue University and they put in 60 fish into a population of 60,000 into the computer program and in 40 generations, they were completely extinct. They were shocked.

This demonstrates an example of slight changes that can occur at the beginning yet multiply over time. What they failed to discuss in that particular model was. “What if those characteristics were to change over time or to be different in the presence of different environmental conditions?”

In the case of plants, the recent study found that there are some survival advantages that are intended. For example, corn that is genetically engineered to be drought tolerant.

But in reality, it turns out the GMO variety is not as good as the natural drought tolerant variety. It’s a complete waste. No one should be introducing that into their crop system because the natural drought resistance works better than the genetically engineered.

That is an example of an intentional trait change that theoretically gives something a higher fitness. There’s also the intended trait to enhance production, which could also give it a better chance to survive in the wild. For example, herbicide tolerance. Once the canola becomes a weed, then you can’t kill that weed with the herbicides that it’s designed to resist. There’s also genetically engineered squash, zucchini, yellow squash and papaya engineered to resist against certain plant viruses. So they’d have additional fitness. But there are also certain genetically engineered plants that have unintentional and unexpected changes in fitness, which can result from either their genetic background or be triggered by specific environmental conditions.

For example, golden rice.  This was the poster child for the biotech industry which claimed it could save against blindness because it can provide vitamin A precursors. There’s a lot of reasons why it’s just basically a corrupt PR system and it’s not really destined to have any big impact. It’s certainly not in its current state.

One reason is that when they crossed it with the Indian variety, it had a growth disturbance probably as a result of the reduction in growth hormones. So it does not have the yield that’s necessary for the rice farmers to actually use it.

In this new study, Roundup-Ready arabidopsis acted as the test plant. Therefore, it was resistant to death from glyphosate and they found that it unintentionally “enhanced the fitness” so it could survive better when there were times of drought and heat. Completely unexpected, but it shows that sometimes the GMO will be more competitive than its natural counterparts.

With rice, they found that when rice crossed with weedy relatives, sometimes there were higher germination rates of the seeds or they produced more seedlings. In one case, the hybrids produced 48-125% more seeds than the non-GMO control. Sometimes the plants were taller, sometimes they had higher levels of photosynthesis. When they were crossed canola with weedy relatives, in one case they produced 1.4 times more seeds than the wild type and sometimes they were showing higher growth. In some cases, the canola became a perennial instead of dying each season when it was crossed with a GMO. These are examples of completely unpredicted side effects that can occur with GMOs.

I interviewed Dr. Jonathan Latham and he talked about CRISPR or gene-editing techniques where you insert a piece of DNA that produces two things. Actually, there are two different DNAs. They produce two different things. They combine with each other when they’re produced, so they become the CRISPR system. One is like a facial recognition software where it identifies certain portions of the genome that you want to splice and attached to it is the splicer or the assassin, which then cuts the DNA in that spot. So they’ll create a gene-edited crop and they will have it cut in certain places.

Sometimes it cuts some places that you don’t want it to cut or creates mutations, etc… But then they’ll store this cell line for maybe even a year while they test a bunch of other things. Then they go back and say, “Okay, we want to grow out this cell line and we’ll clone it into a plant.”

However, you don’t actually test that just before you clone it out into a plant because all your tests were done a year ago. We’re talking about a situation where it’s absolutely destined to create unpredicted side effects because once you release it into the environment, you have no idea what’s going to happen.

Also, when you do the genetic engineering and you end up with mutations, deletions, additions or replications of genetic material, they may be in areas of the genome where you don’t know what they’re going to do and they may not express any differently until that organism comes into contact with another organism, a certain weather condition, or a certain disease.

So you’re creating a ticking biological time bomb where you’ve made all these different changes in the DNA, sometimes hundreds, sometimes thousands, sometimes over 10,000 changes in the DNA all accidentally as a result of the process of genetic engineering. And then you don’t know how that’s going to be expressed in a different phase of life, under different conditions, etc. If you want to amplify that. we already had a situation where now they will spread throughout the environment. When the GMO mates with the non-GMO, let’s say half of the offspring has GMO characteristics, the other has non-GMO. Many of them will have the mutations or the deletions and then they’ll cross and then some will be GMO and some will be non-GMO, but essentially you’re creating a change in the gene pool which will be permanent.

What’s worse is the gene drives engineered to pass the trait on to all offspring. Instead of 50%, it’s 99% of the offspring will have the same trait. They plan to use these to kill off certain species of mosquitoes or certain rats on certain islands because they don’t want to change the ecosystem. But we’ve just talked about how there can be changes in the gene expression. We also know that some genetic changes can shut off the active gene and make it completely silent. So you can have a gene drive that’s designed to wipe out mosquitoes and it will end up not wiping them out, but creating some other genetic change in those mosquitoes, which might make them less vulnerable to die when sprayed with insecticide. They might be more likely to carry malaria or some disease. They might be more aggressive and bite more. So no matter what level of disease they’re having, they might end up creating more diseases.

These are some examples of things we don’t know. And now on top of that, you have bacteria that are being released in the United States this year to be released in the open for soil remediation. What if that shifts and changes as bacteria can do? What if it combines with gut bacteria in ways that we don’t know? We’re talking about that bacteria in different environments, perhaps inside our stomachs or our brains. What’s that going to do? There’s never been a risk assessment to look at these things.

Now we know they can survive and even better in some cases, and that’s a real danger.